Pushing the Envelope (or Molecule) with Quantum Chemistry 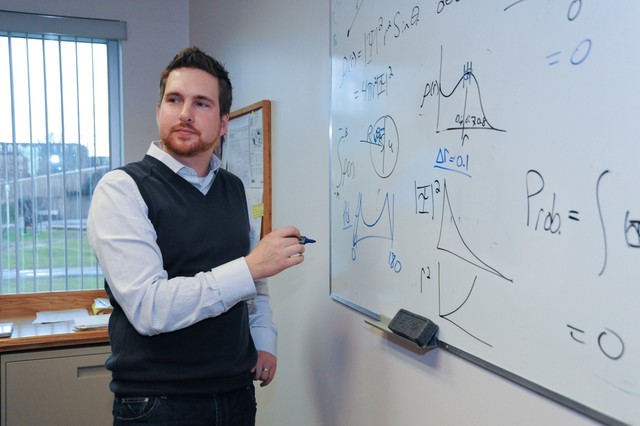 Dr. Jason Pearson’s research team of seven at the University of Prince Edward Island strives to understand the properties of molecules at the electronic level; why they behave the way they do, why some interactions are strong while others are not, and ultimately predict how molecules will behave when interacting with other molecules. It’s a broad scope. They do this by developing and applying computational algorithms.

For example, an experimental researcher might have samples from which they are searching for new compounds. Along the way, they might find something with interesting properties, but need to identify the chemical substance. This is where Dr. Pearson’s group can take the experimental data, build every possibility into models and then run simulations with the data that ultimately allows them to understand the molecule. Researchers then can examine the molecule through a new lens so to speak.

But it doesn’t stop there. Along the way, Pearson is developing new computational tools and new simulation techniques useful for other researchers. Already a resource to colleagues at the University, Pearson’s long-term focus is to utilize and develop computational technology for the purpose of designing new molecules and materials.

His group employs a two-pronged approach whereby state-of-the-art simulation techniques are applied to probe the molecular level of detail in chemical systems, allowing for accurate quantifications of structure, interactions, and mechanisms of action. Simultaneously, they design the next generation of computational algorithms and methodologies for the investigation of electronic structure, specifically focused on the concept of the electron pair.

The methods developed in Pearson’s lab can be applied to almost all matter, and therefore can be used in many fields, such as designing new materials, new industrially relevant catalysts and nanotechnologies to name a few.

Pearson hopes to further push the bounds of what’s possible in computational chemistry by gathering large data sets in the chemical sciences, creating a database for others to access and utilizing the data to develop new simulation techniques that are faster and more accurate. For example, this approach could enable very accurate simulations on large systems like biomolecules and other polymers. His goal is to develop algorithms that behave like a robot, travelling through the data sets, collecting data and solving problems.

The chemistry research that is enabled by Dr. Pearson’s group is addressing a broad scope of the world’s most important technological and societal challenges, such as climate change, energy, security, food supply and health.