Why Materials Do the Things They Do 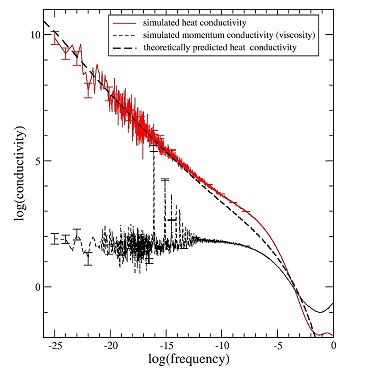 Dr. Geoffrey Lee-Dadswell is a theoretical physicist at Cape Breton University, who for the past 15 years has been studying why materials do the things they do. Specifically, he studies heat and momentum transport on a very small scale.

For an example of large scale heat transport, take a frying pan on a stove. We know that the stove element heats the bottom of a pan to the point that food cooks. However, the handle of the pan doesn’t get as hot. Why? The answer lies in understanding the transport of heat, which obeys Fourier’s Law of Heat Conduction. This law has been known for almost 200 years, but surprisingly, is not well understood.

One of the mysteries about Fourier’s Law is that it doesn’t seem to work for some objects on the nanometre-scale. A nanometre is one billionth of a metre. If you were to lay atoms across a nanometre, you might fit only about 10! Computers for example have become faster largely because the parts of their chips have been made smaller over the years. As this process continues, more and more parts of an ordinary desktop computer or smart phone are nano-electronics.

Lee-Dadswell studies nano-systems that are one-dimensional, which is to say that for theoretical purposes, they have only length. Now because we live in a three-dimensional world, everything has a width and a depth. However, in some nano-systems, these are so small that they can be ignored. Examples of one-dimensional systems are carbon nano-tubes (think of these like a sheet of graphite that’s been rolled up into a tube) and polymer chains such as the polyethylene chains that pop bottles are made of. Carbon nano-tubes are often a few micrometres long, but can be only five to ten nanometres wide.

Physicists once believed that everything obeyed Fourier’s Law of Heat Conduction, but researchers have found that these one-dimensional systems behave differently from other systems –disobeying Fourier’s Law. Moreover, they don’t know why, which also means that they don’t have a solid understanding of why everything else does obey Fourier’s Law. Physical laws are preferably derived from the more fundamental mechanics, but nobody knows how to derive Fourier’s Law from mechanics. If they can’t derive it, then they really don’t understand the law. This drives physicists nuts! It means that we don’t understand things like heat flow as well as we thought. This puzzle began to surface in the early 1900s, but didn’t come to the forefront until the 1970s. It’s challenging to make progress on such a long-standing mystery, and tackling it is therefore rather scary. Lee-Dadswell is one of only a few researchers in the world doing so.

Lee-Dadswell generally has one or two undergraduate students working with him. He develops models, and the students then run dozens of simulations in parallel on ACENET systems, each running for possibly weeks and involving tens or hundreds of thousands of atoms interacting with each other.

By understanding the fundamental laws of transport, solving problems such as removing heat from nano-electronics and improving refrigeration technology become possible.